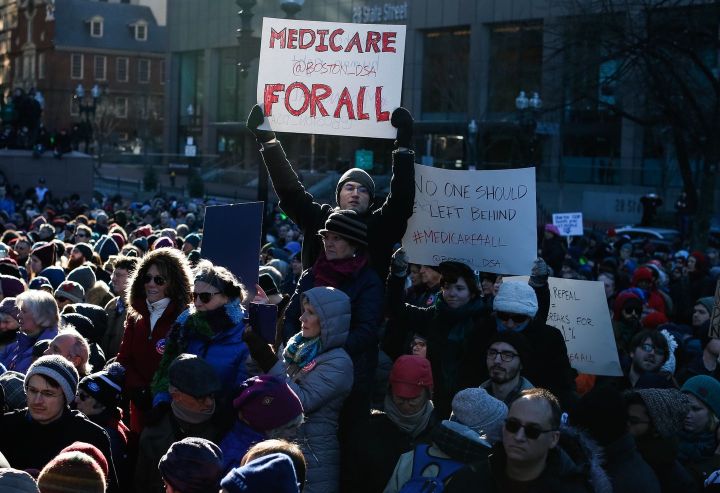 The American Dream is a statement that perpetuates the ideals in which freedom and hard work provide for opportunities of prosperity, success, and good health. However, the fragility of the American system proves that this statement mainly applies to those who face few social and economic barriers in the first place. While the United States’ brand of capitalism continues to be exposed, one big issue lies in the healthcare system being directly tied to employment and how women, minorities, and LGBTQ continue to face discrimination.

Employment tied health insurance originated during the timeline of World War II. The demand for labor increased due to the amount of men stationed abroad, and consequently, wages and prices climbed. To prevent the turnover of employee’s due to salary preferences, the National War Labor Board implemented a wage cap, preventing employers from raising worker’s salaries. In addition, health insurance was used as a benefit by employers to attract the best job candidates (Gorenstein). Finally, the IRS decided that employer contributions to healthcare insurance premiums were tax free, giving the wealthy a loophole to Roosevelt’s New Deal Taxes. From its origin, the integration of healthcare and employment was meant to benefit the wealthy and uphold the American ideals of capitalism under the guise of access to health benefits. In reality, health insurance should not be an added bonus, but a necessity for all regardless of employment status, race, gender, and sexual orientation. Over the past decades, methods to combat the exclusive nature of health insurance have been implemented such as Medicare, Medicaid, and The Affordable Care Act.

As of July, amidst a worldwide pandemic, nearly 50 million American’s have filed for unemployment (Kelly). This means that not only have many American’s lost their source of income, but also their employer-based health insurance. On top of this, the Trump Administration has asked the Supreme Court to overturn the Affordable Care Act. According to a recent analysis by the Center for American Progress, more than 23 million people would lose health coverage if the ACA were repealed during the pandemic (Gee).

Seeing as though unemployment rates are highest for Black or African Americans and Hispanic or Latino people, these demographics are less likely to have access to employment issued health insurance and are more likely to resort to health care covered by the ACA (E-16, Unemployment Rates). Furthermore, as of June 12, 2020 the Centers for Disease Control and Prevention reported that age adjusted COVID-19 associated hospitalization rates for Hispanic and black persons rate are 4 and 5 times that of non-Hispanic white persons respectively (Centers for Disease Control). The absence of the Affordable Care Act would disproportionately affect these groups, further instilling the notion that minorities suffer from long standing systemic health and social inequalities.

The Trump administration also recently ruled that they would remove nondiscrimination protections when it comes to health insurance and health care for LGBTQ individuals. This ruling focuses on Section 1557 of the Affordable Care Act. Federal law states that it is illegal to discriminate on the basis of “race, color, national origin, sex, age, or disability in certain health programs and activities”. In 2016, a rule proposed during the Obama-era explained that protections regarding “sex” encompass those based on gender identity: male, female, neither, or a combination of male and female (Simmons-Duffin). However, the rule recently finalized by the HHS Office for Civil Rights under Trump reverses the previous ruling from the Obama Administration, meaning that the term “sex” only covers biological sex. Under this ruling, transgender people could be refused at a doctors’ office for something as rudimentary as an annual check-up (Simmons-Duffin). Another possible scenario is a transgender man being denied treatment for ovarian cancer or uncovered costs relating to gender transition. This rule goes beyond the ACA, but also could mean the denial and limitations of access to employment based insurance and cost-sharing. Women are also negatively impacted by this ruling, as they can now be denied access to abortions or birth control if the act goes against the employers/insurers moral or religious beliefs. The government estimates that between 70,500 and 126,400 women would immediately lose access to no-cost contraceptive services (Dwyer).

Although these rulings and the negative effects of employment linked health insurance impact these demographics separately, fighting for the health rights of one of these groups is not exclusive. The intersection of these demographics collectively makes up the most marginalized group in the U.S: black, transgender women. Drawing on intersectionality emphasizes the importance of seeking justice through disrupting systems that perpetuate racialize, gendered inequalities in all facets, not just healthcare. The healthcare system in the U.S was built to benefit corporate America and continues to be upheld by white, cis-gendered men. Understanding how social and economic factors and stressors impact marginalized demographics will help the public better understand viewpoints outside of the upheld status quo. Expanding resources to further research the issues faced by black, transgender women will not only help the group as a whole, but also black communities, transgender and LGBTQ communities, as well as women respectively.